Solutions for primary, secondary and tertiary treatment of industrial and civil wastewater.

Organic substances constitute the major source of pollution of discharge water. Nature reacts spontaneously to such forms of pollution by developing b...
VIEW MORE 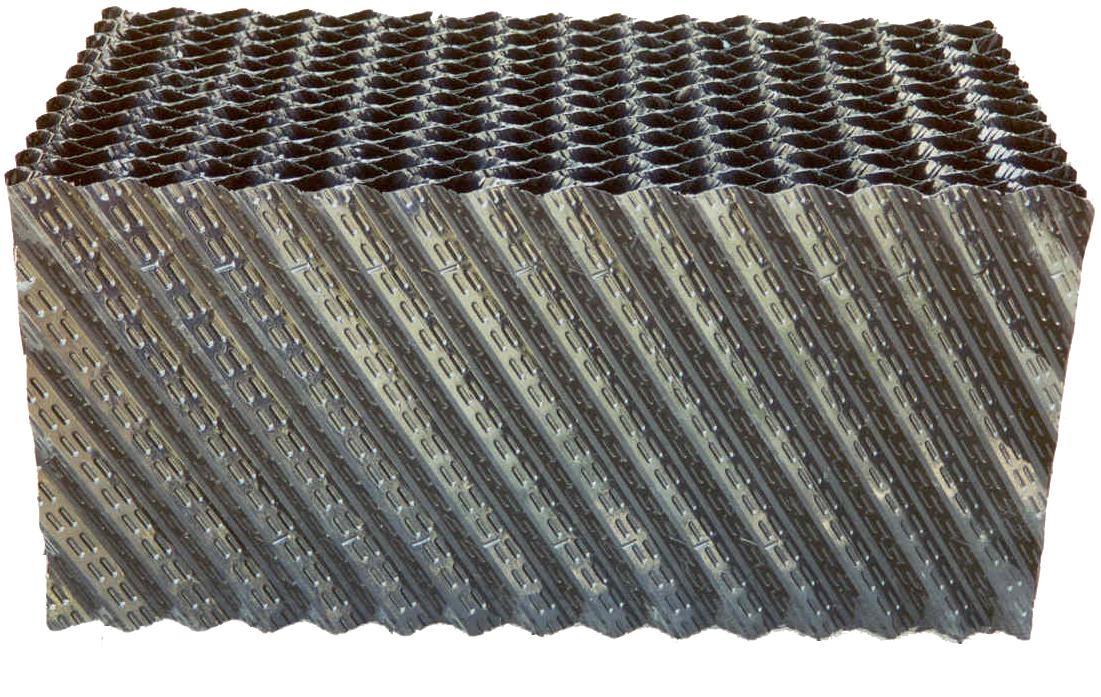 
Organic substances constitute the major source of pollution of discharge water. Nature reacts spontaneously to such forms of pollution by developing bacteria which decompose the organic refuse.However the bacteria find themselves in competition with other forms of aquatic life so far as oxygen requirement is concerned. If the oxygen is lacking the bacteria do not survive and the water quality is severely affected as a result.
The determining factor of the state of health of the water is thus the oxygen, and consequently the degree of pollution is expressed in terms of BOD, i.e. biological oxygen demand.

Trickling filters came into being to satisfy this biological oxygen demand before the water is discharged into the receiving water courses and reservoirs, thus avoiding the damaging effects of eutrophication on rivers, lakes and seas.

margherita trickling filter fill is the result of the evolution of fills used in the past, such as, for example, stones and wood. By employing this new fill material one can make much higher structures, with much greater specific surfaces and with a reduced risk of blockage.

The bioset structured fill material is composed of an alternating series of flat and/or undulated sheets in PVC, glued together in order to provide a light-weight, robust and rigid structure. Such modules therefore prove to be able to sustain high loads.

These structures, the result of a precise design, provide high active surface for bacterial growth in a relatively small volume and possess free spaces for flow passage sufficiently large to avoid such bacterial accumulation as could cause blockage of the trickling filter.
The flow of the percolating/trickling liquid can be vertical or cross-flow, depending upon the models: the structure of the Bioset fills is such that the direct crossing of the entire module is prevented. Moreover corrugations have been inserted in the sheets to permit an easier attachment of the biomass and increase local turbulence, which enhances the exchange of oxygen between the air and the liquid.

In practice, the liquid is uniformly distributed over the blocks which prevent its free fall and facilitate the flow, wetting the entire useful surface with a uniform and fine film. The liquid, which contains organic residues, is in continuous contact with an airflow created by natural draught which provides a constant oxygen supply. In this manner, the bacteria which develop on the fill surface have all the elements necessary for their growth.

Thanks to the modular structure and limited weight, the Bioset blocks can be easily handled, stored and installed in trickling filter towers. 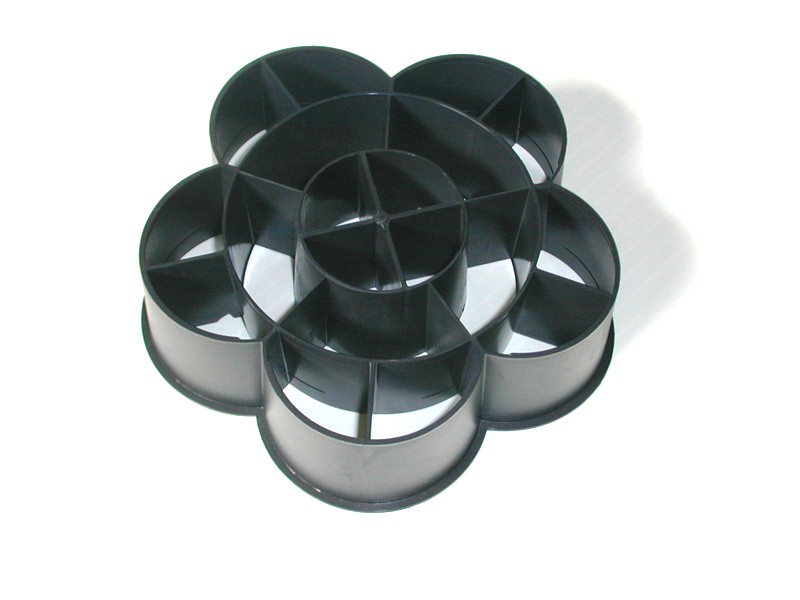 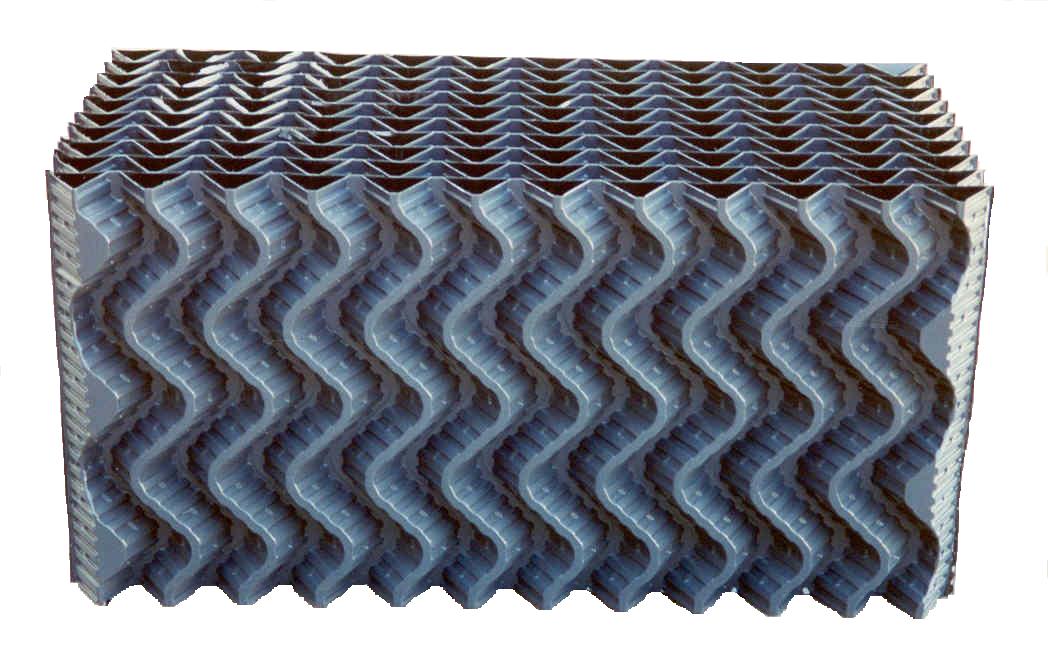 The standard version envisages the supply of rectangular blocks. For supply to distant countries there is the possibility of shipping unglued sheets; their assembly can be performed on site by means of equipment easy to use even for non-qualified personnel. 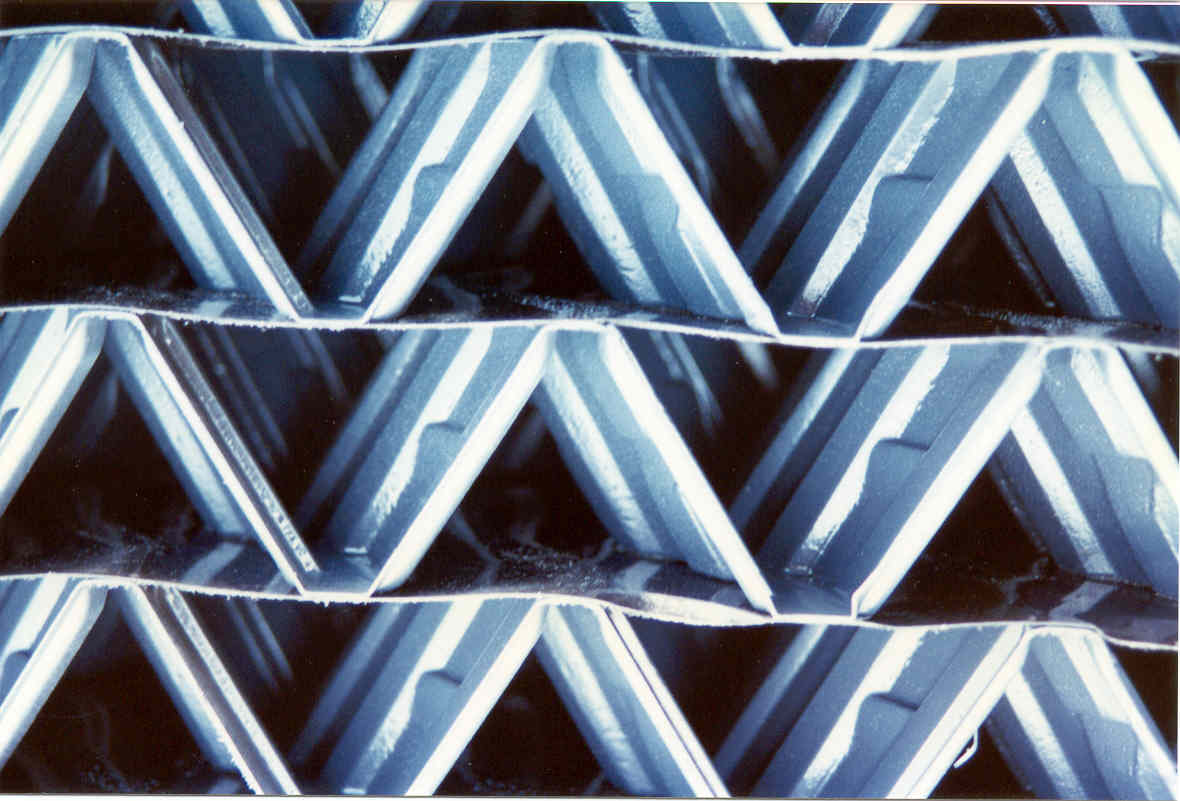 DO YOU WANT MORE INFORMATION ABOUT
OUR COMPANY AND TEAM?